Tripawds Supporter sites have no ads!
Skip to content

Tripawds is a user-supported community. Thank you for your support!

Thank you for visiting this blog! Here is some backstory on our 6 beautiful rescued Tripawd and Special needs Pit Bulls!

Kafziel was rescued from California when he was young, he was everything a pit bull should be, then at 13 weeks old he broke his leg. After 2 orthopedic surgeries to try and correct it, the scary truth was to in fact to amputate it! We were devastated for this young healthy dog who loved to run and swim! How could he possibly do these things anymore? We never knew this one fateful issue would open up a whole new world for us and all those around us. After his amputation Kafziel was still the same pit bull we loved, and he still ran, still played fetch, still went swimming, everything he had done before, but without the pain, and so began our quest to save, educate, and advocate special needs pit bulls!

Pyg was next, at just 14 weeks old she was rescued out of the back of a truck before being taken to a shelter that would have no doubt euthanized her. She had bite wounds all over her face, a necrotic rotting eye, she was bleeding from her nose, she was covered in ticks, and she could not hear from her left ear. She was obviously used as a bait puppy, and every ounce of her spoke the truth about what a pit bull was. She had obviously been neglected, possibly tortured, chewed on and yet that tale wagged from the moment we brought her into our house. She had to have her eye removed, a migrating foxtail was pulled from her nose which left some damage and now she has a little snort, she still bears a huge scar across the top of her head from a terrible bite wound, but she is nothing but love. After moving from California to Pennsylvania, we thought we were complete, 2 pit bulls were plenty,

then Coven came along. A little 5 month old puppy who also had the unfortunate luck to land in the hands of an abuser. He had 3 out of 4 broken legs, his right elbow and both femoral heads on his back legs were broken, these breaks were at least 4 weeks old and he had drag marks on his feet where he had to drag himself around by his one good leg. His elbow fracture was too much to consider repairing so we amputated his right leg and he had bilateral FHO’s on the back, which is where they remove the femoral head (the socket part of the bone) on the back. He has recovered well from surgery and plays Frisbee, and swims and is the happiest guy when he is in his own element. He still has some trust issues with people, which no one can blame him, but he has overcome more than his share of orthopedic misfortunes.

Valak was pulled off the streets of Philly by animal control, he was emaciated at just 32 pounds, he is now 65, he had a mangled mess of infected ears that were shredded and abscessed and past the point of saving so they had to be removed. He was found only having 3 legs, but judging by his ears and scars he had obviously spent some time fighting whether it was for food, sport or only to survive we will never know. He definitely had some aggression and possession issues when we first decided to adopt him, but we were convinced that we may be his only shot at survival! We have worked tirelessly in training and at home to make him a functioning part of this family, and he has become just that! He is the sweetest boy with people even though he endured so much and now that we have learned his behavior he is doing so well with dogs and after 6 months of training he has now become a demo dog for the dog trainers at Passion for Paws who helped us through it all see that Valak could be a normal dog. Last but not least there is

Davey Joe. Davey is our most special case. He has been diagnosed with Cerebellar Abiotrophy which means the neurons in his cerebellum are dying off. This affects his balance and coordination. He lived his whole life in New York in a yard tied to a dog house. When animal control finally came to take him because of his neuro issues, he then spent 7 months in a shelter (Riverhead Animal Shelter) where he quickly became a favorite of the staff and volunteers. They tried very hard to get him adopted out and it wasn’t until one of them sent his video to Desperate Dogs of Long Island’s facebook that a wonderful rescue organization Mr. Bones & Co. decided to pull him and get him into a home. We emailed them and told them we had room for one more. No one knows how much time Davey has, but we were certain that we could make what time he did have incredible! Davey Joe has taught us so much, helped us understand even more what it is that we were meant to do on this earth!

Alastor is our newest addiotion! we rescued him at only 5 weeks old from the hands of a back yard breeder so to speak, the lady had 3 unaltered pit bulls and twice they had litters, this time we were fortunate enough to work with a rescue to take the puppies and the rescue got them all into good homes. Alastor according to the lady who had him had his foot bitten off by his mother, however after going to get him we realized that this was not the case, his leg just did not form correctly and he has a fused elbow and only one tow on what should have been his foot. He will eventually have an amputation surgery to remove this fused part of his body because he drops his elbow on the ground when playing and running and it will most likely cause some pain, sores, and discomfort!

This family has a passion for special needs dogs and we will continue to eduacate, advocate, and gladly give advice to anyone else that would love to make one of these special yet amazing dogs apart of their family!


To remove ads from your site and others, upgrade to a Tripawds Supporter blog!

Add an excerpt to your posts to provide a summary for readers in many blog themes! 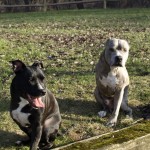 Tripawds is a user-supported community. Thank you for your support!

Read this for important information!

Welcome to Tripawds. Please read on for important tips. This is your first post. Edit or delete it, then start blogging. Don’t miss our helpful WordPress tutorial videos if you need help getting started with your new Tripawds blog.

Please publish a new post (or edit this one) to share your story. The Tripawds community is only notified of new blog posts in the Recent Posts widgets found throughout the News blog and discussion forum pages. Members will not be notified of any comments made on this default first post. You can also choose to edit or delete your sample page.

Publish a blog post or your site may be deleted!

Please be sure to publish at least one blog post to let us know you that you may use your blog. NOTE: Failure to do so may result in your site being deleted. If you upload photos to your Media Library, but fail to publish a post, we’ll never know they are there and they may be gone forever!

Another way to ensure your site does not get deleted, is to upgrade it with a Tripawds Supporter subscription.

By default your site will be indexed so Tripawds members will be notified of your update in the Recent Posts lists throughout this community. If you change your Privacy settings to discourage search engines, your posts will not be indexed!

To limit the amount of spam you receive, any first comment a reader makes on your blog will require moderation. Be sure to “Spam” any inappropriate comments, and approve those from your readers so their future comments appear immediately. You can change your comment options from the Settings -> Discussion tab in your dashboard.

Tripawds Blogs shall NOT be used for fundraising purposes.

Direct appeals for financial assistance to help cover care expenses will be deleted without notice. Everypawdy in the Tripawds community faces their own share of high expenses related to surgery, recovery and care. Veterinary financial aid resources can be found in the Tripawds News blog. Please see the Tripawds Fundraising Appeals Policy for more information. Thank you for your understanding.

Thank you for sharing your story, and happy blogging!

About Your Tripawds Blog:

New Tripawds Bloggers: Please review your default first blog post at left for lots of helpful links for getting started with your blog or review the Help Videos in your dashboard. Edit these widgets from your Appearance settings to remove this notice, upload a custom header photo, or choose from 130+ themes, and much more!

Home of 4 Tripawds is brought to you by Tripawds.
HOME » NEWS » BLOGS » FORUMS » CHAT » YOUR PRIVACY » RANDOM BLOG


Tripawds Supporter sites have no ads!